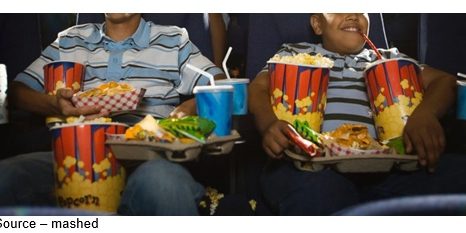 While moviemakers had shifted their focus to tomorrow to drill down and determine how they could develop, afford and enforce wholesale changes in the way movies are shot/made, NATO (National Association of Theater Owners) and UNIC (International Union of Cinemas) as well as indie and chain operations around the globe were reevaluating how people would be watching a movie in a theater.

Even as plans were being developed, there was an unsaid agreement that some theaters would close.

North America is over screened with 41,172 screens and it’s estimated that 5,000+ screens will disappear.  Worldwide, there are more than 203,000 screens, an increase from five years earlier of 155,000 which is a major overbuild no matter how good concession sales are.

Organizations that can’t afford to improve their operations and systems to meet tomorrow’s movie audience’s needs/expectations will close their doors.

Despite the high cost of investment, AMC and other leading chains have upgraded and expanded their facilities.

Everyone in the industry recognizes that changes were long overdue for the cinema business model.

Disney, which had a significant line up of modest and tentpole projects to release, took a more tempered approach evaluating each film, its potential and optimum positioning or, as Chapek said, “Be flexible to read all the clues.”

They weighed what was the best opportunity for each film and the market/viewer potential, moving some direct to their streaming service, adjusting the theatrical schedule or providing an abbreviated theatrical/streaming plan.

As Allan McLennan, CEP/Media, Head of M&E North America, Atos, observed, “Disney does a great job of maximizing revenue throughout all the windows.”

The once sacred 90-day theatrical window is gone but we are still a long way from blanket day/date releases because studios still need to maximize their revenues for each film before transitioning to other home entertainment options.